Over the years, Lieutenant Governors of Nova Scotia have held investitures and award presentation ceremonies at Government House to recognize the achievements and the exemplary service of a wide variety of individuals.

Since 1935, during commemorative years such as the Sovereign's Coronation or Silver Jubilee, there has been a tradition of holding investitures for Commemorative Medals at Government House including the Golden Jubilee (2002) and the Diamond Jubilee (2012) of H.M. Queen Elizabeth II, Queen of Canada.

Her Majesty Queen Elizabeth II, Queen of Canada has also invested a small number of Nova Scotians with the Royal Victorian Order at Government House.

Below are a few highlights of investitures that have taken place at Government House over the years:

1918 - The Victoria Cross posthumously awarded to Private John Bernard Croak, VC of Cape Breton, was presented to his mother, Mrs. James Croak, by then Lieutenant Governor, the Hon. MacCallum Grant at Government House.

"For most conspicious bravery in attack when having become seperated from his section he encountered a machine-gun nest, which he bombed and silenced, taking the gun and crew prisoners.  Shortly afterwards he was severly wounded but refused to desist.

Having rejoined his platoon, a very strong point, containing several machine guns, was encountered.  Private Croake, however, seeing an opportunity, dashed forward alone and was almost immediately followed by the remainder of the platroon in a brilliant charge.  He was the first to arrive at the trench line, into which he led his men, capturing three machine guns and bayoneting or capturing the entire garrison.

The perseverance and valour of this gallant soldier, who was again severly wounded, and died of his wounds, were an inspiring example to all."  (London Gazette, no 30922, 27 September 1918)

Recipients of the Order of Canada are normally invested by the Governor General of Canada at Rideau Hall in Ottawa, however, there are occurences where newly appointed members are unable to travel to Ottawa and are instead invested in their home province by the Lieutenant Governor.

1985 - Then Lieutenant Governor, the Honourable Alan R. Abraham, invested Mr. Frank H. Sobey as an Officer of the Order of Canada in the Ballroom at Government House on October 25th, 1985.

"Honorary Chairman of Sobey's Stores Ltd., Chairman of the Empire Co. Ltd., and founding President of Industrial Estates Ltd., he is the dean of Nova Scotian industrialists.  Throughout his career as a businessman and public servant he has worked assiduously to promote Nova Scotia's people and industries, contributing extensively to employment and economic prosperity in the region."

1994 - While staying at Government House during the 1994 Royal Visit, Her Majesty Queen Elizabeth II, Queen of Canada personally invested Mrs. Ethel Garnier with the Royal Victorian Medal.  The medal is bestowed personally by the Sovereign for personal service to the monarch.  Mrs. Garnier who was the Housekeeper at Government House, had worked at the residence for 36 years.  Together with her husband, Mr. Walter Garnier, their combined length of service at Government House exceeded over 100 years. 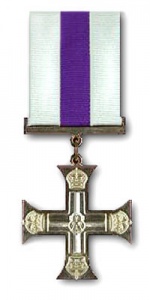 1917 - The Military Cross awarded to Lieutenant Eric Reginald Dennis, who was killed at Vimy Ridge was presented to his mother, Mrs. Agnes Dennis, at Government House by the Duke of Devonshire, then Governor General of Canada, at Government House, Halifax.  Lieut. Dennis was the son of Senator The Honourable William Dennis, owner of the Halifax Herald and the Evening Mail.

"For conspicous gallantry in action.  He commanded and handled his battalion under very trying circumstances with the greatest courage and ability.  He has previously done very fine work." (London Gazette, no 29837, 24 November 1916) 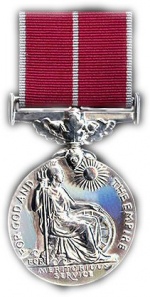